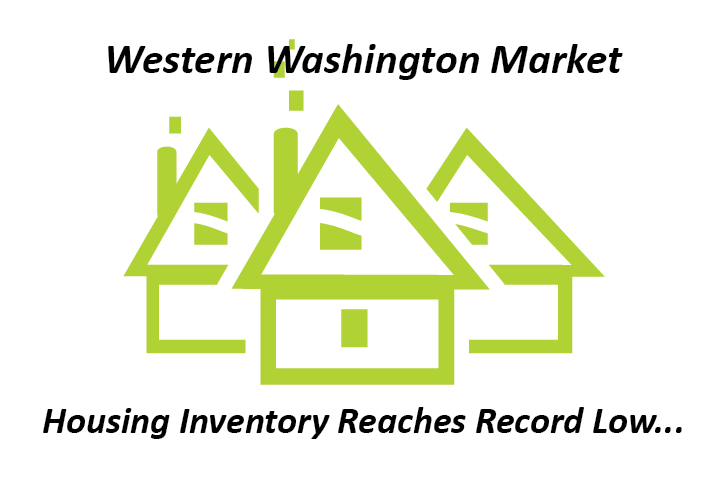 KIRKLAND (March 6, 2017) – Home buyers are in a spring mood, but sellers are still hibernating, suggested one broker while commenting about the latest statistics from Northwest Multiple Listing Service. Figures for February and feedback from brokers indicate record-low inventory is spurring multiple offers, rising prices, fewer sales, and frustrated house-hunters.

During the past three months, brokers have added 17,572 new listings to inventory, down only 5.7 percent when compared to the same three-month period of a year ago. During the latest December-to-February timeframe, MLS members reported 22,393 pending sales, far outpacing the number of new listings.

“Our robust market has created extreme conditions, and we’re seeing frenzy hot activity on each new listing coming on the market,” reported J. Lennox Scott, chairman and CEO of John L. Scott. “We’re also experiencing some of the lowest inventory levels on record,” he noted.

In fact, a check of Northwest MLS records dating to 2004 shows no other month when the number of active listings dipped below the 10,000 mark – until last month.

At the end of February, there were 9,091 active listings in the Northwest MLS system, which encompasses 23 counties. That represents a drop of nearly 25 percent from the year-ago total of 12,107.

“Home sellers and buyers are complaining equally about the current market’s low inventory,” remarked MLS director George Moorhead, designated broker at Bentley Properties. “Sellers are frustrated when they cannot find another home to match their current needs, or when a home goes off market so fast that the option of a contingent sale is not even considered,” he stated.

Buyers have been grumbling about the market for the past two years, Moorhead said. “That mood has escalated into a panic as other buyers up the ante – at times to a level that even causes real estate professionals to shake their heads,” he remarked.

Brokers believe seasonality is a factor, with several saying they are expecting an uptick in listings.

“For buyers, hope springs eternal, but the sellers are still hibernating,” suggested John Deely, the principal managing broker at Coldwell Banker Bain. “We’ve been experiencing continued high buyer demand as the spring market takes off early but sellers are on a more traditional schedule as listings slowly ramp up,” he reported, adding, “Sellers that have come to market ahead of the traditional spring market are reaping the benefits of less competition [from others who are selling] and a highly competitive buyer pool.”

Deely said anecdotal information indicates many sellers are preparing their properties for the more traditional listing time around May.

That expectation was echoed by fellow MLS director Frank Wilson, the branch managing broker at John L. Scott in Poulsbo, and by Lennox Scott.

Scott expects inventory to start rising in March, but he also anticipates the number of buyers will increase too. “It will continue to be a competitive market in the more affordable and mid-price ranges,” he predicts.

“The spring market in Kitsap is a little like waiting for the tulips to begin coming up. We have the buyer demand but the inventory has not started springing up yet,” commented Wilson. “Open houses have a lot of traffic and we are seeing multiple offers on new listings that are priced correctly.”

Wilson noted Kitsap County is seeing an increase in investor type buyers as they anticipate the impact of the new fast ferry system, now in the beginning stages of roll-out. “Access directly to Seattle on a fast foot ferry will have a large impact on Kingston, Bremerton, and Port Orchard, while hopefully reducing the pressure on the Bainbridge Island terminal,” he stated.

“What many don’t realize is that while a lack of inventory might help a seller get more for their home, it has a downside,” according to Wilson. “It can cause potential sellers not to list, appraisals to come in low, buyers to lose out to multiple offers, VA and FHA buyers to take second chair to cash or conventional loans, and a general frustration from lack of choice. A balanced market is always preferable to this unbalanced state of things,” he remarked.

Scott agreed, saying, “Some potential sellers are currently parked in a gridlock position because they are afraid to put their home on the market for fear they either won’t find a home, or they will find themselves in a multiple offer situation. This has stalled the migration pattern of sellers who would normally be putting their homes on the market.”

Moorhead suggested one tactic for buyers, given the historic low levels of inventory, is to start looking below the price point they’ve been considering. “Getting into a home and then moving up in 3-to-5 years is becoming a more common theme as most buyers cannot secure the home they wish to be in long-term. This is a definite shift in mindset since the average homeowner typically lives in a home 7-to-10 years.”

“Home sellers are benefitting from the perfect storm of market conditions, but as the ongoing low inventory levels and precipitous drop in pending sales indicate, there simply are not enough homes to meet the demand of buyers. All of this is pushing up home prices faster than anywhere else in the country and will continue to do so if we don’t see more homes come on the market this spring,” said OB Jacobi, president of Windermere Real Estate.

“With less than a two month supply of inventory, we will continue to see price escalation,” stated Wilson, who noted prices on closed sales of single family homes and condos in Kitsap County, where his office is situated, are up 10 percent from a year ago. That county has about 1.4 months of supply, third lowest among the 23 counties in the MLS database.

In King County — one of only four counties where the volume of closed sales fell from a year ago – prices jumped 14.1 percent, climbing from $439,950 to $502,000. Despite the drop, King County’s year-to-date total of 3,803 closed sales is running 7.3 percent ahead of the first two months of 2016. System-wide, the number of completed transactions for January and February is up 12.3 percent. Deely believes those figures indicate the “fast pace, high velocity market” will continue to grow in 2017.

“At this point it appears that those seeking to stay in ‘commuter counties’ that surround the job hub of King County have the best opportunity to do so in Pierce County,” suggested Mike Grady, president and COO of Coldwell Banker Bain. “However,” he noted, “inventories in Pierce County are shrinking at a high rate as well (down nearly 24 percent), suggesting that demand is pushing southward to Tacoma/Pierce County. That will likely cause sales prices to spike in the future, so this opportunity may not last long.”

Condo inventory plunged 33.2 percent, most notably in King County where brokers reported a sharp drop, at 41.5 percent. At month end there were only 759 condos listed for sale, down from the year-ago total of 1,136 units.

Asked about recent news reports of immigrants backing out of home purchases in reaction to the President’s immigration policies, brokers had mixed comments.

“While we’re hearing from our brokers about buyer uncertainty related to those holding H-1B work visas (for temporary employees) and those who are undocumented residents, we don’t at this point see a significant effect on the market. Until we have clarity around the Trump Administration’s executive orders on immigration, it’s impossible to know what effect they may have,” said Grady.

Moorhead said there is a “distinct ripple being felt,” but added, “We do anticipate many buyers with the H-1B visa to start cooling their interest until clarity is given to how this new policy will shake out.”

Northwest Multiple Listing Service, owned by its member real estate firms, is the largest full-service MLS in the Northwest. Its membership of more than 2,200 member offices includes more than 26,000 real estate professionals. The organization, based in Kirkland, Wash., currently serves 23 counties in the state.