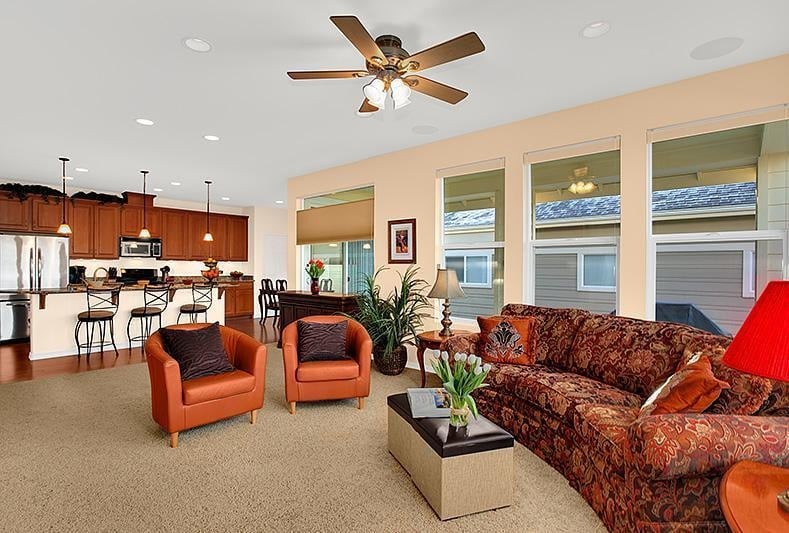 Except for the Seahawks, and a couple of million 12th persons, January was a dreary month, especially for real estate.

Inventory.  There isn’t any.   As February began, there were only three homes for sale among Trilogy’s 1,522 lots.

If a bakery doesn’t bake bread, rolls, pies and cakes, its showcases are as empty as the cash register.  Looking over my statistics from many years it’s apparent that appetites for new homes were filled in the frenzy of 2013.  Once the fiscal cliff concern was overcome and the Presidency was decided, a lot of checkbooks loosened up.  Inventory disappeared.  More than 40 percent of buyers paid cash. Get used to that as interest rates and the age of Baby Boomers elevate.

Closer Looks at the Market

Media reports prices are relatively stable but days on the market are increasing.  Waiting for prices to rise means entering the market as mortgage rates approach five percent, perhaps even higher on an APR basis.  For sale signs stay up longer and suddenly, a contingent offer looks pretty good.  That means the seller hopes that reduced inventory means the buyer’s house will sell quickly.  But it really means that buyer and seller are locking themselves into a circuitous escrow closing process.  It’s not a bad plan when all else has failed. However, proper presentation, promotion and pricing are the preferred way of the Elephant, especially when there is no competition.

So, maybe now is the time to move swiftly, but deliberately, taking all the steps to prepare to showcase a property well so it sells quickly, and profitably.  But buyers are cautious and know the choices will grow as time passes. So, hire the Elephant, do it right, and the choice will be there for folks with check books in their pockets.

Last month, I mentioned my forecasts were used by Trilogy committee members to estimate incoming RCA working capital for 2013. I calculated about a 10 percent increase in resells.  I was spot on and exactly on the mark about Shea’s new builds.   As 2014 begins, I sense a decline of about 20 percent for resells.  It’s an estimate based on a decade of experience.  Among the factors are Shea has only one house left to sell which means Trilogy now is totally a resell community.    It’s unique, certainly, but the

More Trilogy residents will move to sunshine states, perhaps as they age closer to relatives or into next stage housing.  Their homes will be bought by folks a dozen years younger.  The market for Trilogy’s as a unique community will remain stable.  New retirees will continue to be attracted to Trilogy because it’s a great place to live and, like the original owners, they will enjoy a life style with neighbors who have common interests and appreciate the quality of the community and its amenities.

A friend of mine was shopping for homes in Kirkland recently. He and his bride are toying with leaving Trilogy. Afterward, he emailed me the following question: “Is it just me, or are prices rising a lot?” Here’s how I responded:

“Pricing? It’s not just you. I expect prices generally to creep up fairly quickly through March and then slowly level off through July, holding firm for the rest of the year.  But, and it’s a significant exception, I won’t include Trilogy in that prediction.

I see Trilogy’s lower end homes rising from $375,000 to $435,000.  Upper end homes to go a little nuts in either direction.  Homes in the middle will, I believe, find a comfort level and hold steady.  In Trilogy, we had our appreciation to a point of shock and those waiting for it to go up more will be disappointed. There’s always a several month gap between facts and the time neighborhood gossip catches up to reality.

For months a Trilogy member and I have been holding off on selling an ARCH home.  We were waiting to see how much more the King County Index will allow her to sell for in 2014. It was a wise decision. Based on 2012’s average sales, ARCH would only allow her to price her home up to $337K last December. Now, based on 2013’s Index, she can sell it for as much as $373K. The market will support almost that much and we are preparing the home for sale as we speak. She’s a happy seller and we were happy to wait for her to make another 10 percent.  It’s the way of the Elephant, doing what’s best for our customer. If you own an ARCH home and are curious about your value cap, I can help. Just give me a call. Watch for our signs, we’re pressure washing, landscaping and staging a few in all price ranges.

The Reality of January – Market Activity for January 2014

Just TWO homes closed escrow in January; down from 14 in December.

Marketing is everything.  I’m always disturbed when a Trilogy home, especially one in an attractive price range,  would take three to five months to sell, and then at a 10 percent discount.  It reinforces my idea that Trilogy is like no other neighborhood.  Selling in Trilogy requires long and solid experience and a very special skill set to do it well.

Both of these sold homes were under contract in December of last year. So far this year, there has been one new listing; the first since November 5th, 2013. It was a Whidbey, listed by yours truly for $549,950. It sold for more than asking price with two full-price or better offers in a day and will close soon. Again, proper preparation, promotion and pricing; It’s the way of the Elephant.

There are 7 pending sales including:

*These have been pending for quite a while as they are Shea “new builds” under construction. The property in bold is the work of “The Elephant” and 2014’s first listing and sale. The actual “sold price” is available only after closing.

And, as of February 1, 2014, there were THREE properties available for purchase including

*Shea’s last new construction home.  ** A very, very customized, golf course, view home with an abnormal amount of upgrades inside and out, including a basement.

Let’s look beyond Trilogy for a moment.

In 2013, across the U.S.  Home values rose roughly 5 percent.  In some markets, values were up as much as 20 percent.  Those increases are not sustainable. This year, home value gains will slow significantly because of higher mortgage rates, more expensive home pricing, and a growing inventory.  Nationwide, that growing inventory is because of fence sitters jumping into the home selling pool and more supply created by fewer underwater homeowners. In addition, new construction has picked up substantially adding to the inventory. I’d look for values in the Seattle area to go up this year between 3 and 4 percent.

Mortgage rates should climb to around 5 per cent, still a terrific rate historically.  When this happens, lending will loosen up helping more buyers who need financing to qualify.

With the amount of sellers having felt the sharp, unfamiliar bite of rapid depreciation and finally, a slow recovery, many are apprehensive and choosing to rent for a while; maybe forever. This is driving rental prices up and eventually, will go through the roof. Yes, it’s that full circle thing again because, when that happens, renters will want the tax write off (if it still exists) and they’ll begin to invest again. That will take a couple years, possibly longer.

Good news. Zillow.com, the country’s leading real estate industry economic analysis authority, reports Seattle is among the “2014’s Hottest Local Markets.”  It’s number two behind Salt Lake City. Zillow reports combine unemployment, population growth and the Zillow Home Value Forecast to determine which markets will be the hottest. The list is intended to give an early view into housing markets that are likely to experience heavy demand for homes, as well as increasing home values. I’ve been watching Zillow for years. They’re database has grown and they are getting very accurate in some markets. They’re trends, although not necessarily their pricing, are something I find quite accurate.

Here are their top 10 predictions in order.

Happy? Enjoy your life. Thinking of selling? Do it. Your cards have all been revealed and there’s nothing left up your sleeve. What you intend to buy will go up in pricing; most likely, faster than your current home. Trilogy pricing led the industry and peaked earlier than the most of the rest of Seattle.  Thinking of buying?  Set up a meeting with your real estate broker now and start planning. He or she will be able to get your foot in the door hopefully, before the bidding war season begins again. I hate bidding wars but it is reality in many venues. Thank goodness, Trilogy is not as crazy as some.

For more details regarding your own unique situation, feel free to call me anytime at 425.501.8424. We don’t spend hours on the golf course.  We don’t vacation a lot.  We love what we do, REAL ESTATE.  We take it seriously and do it full time.  It’s what folks should expect.

That’s a wrap for January. Have a prosperous, fun and enjoyable 2014.