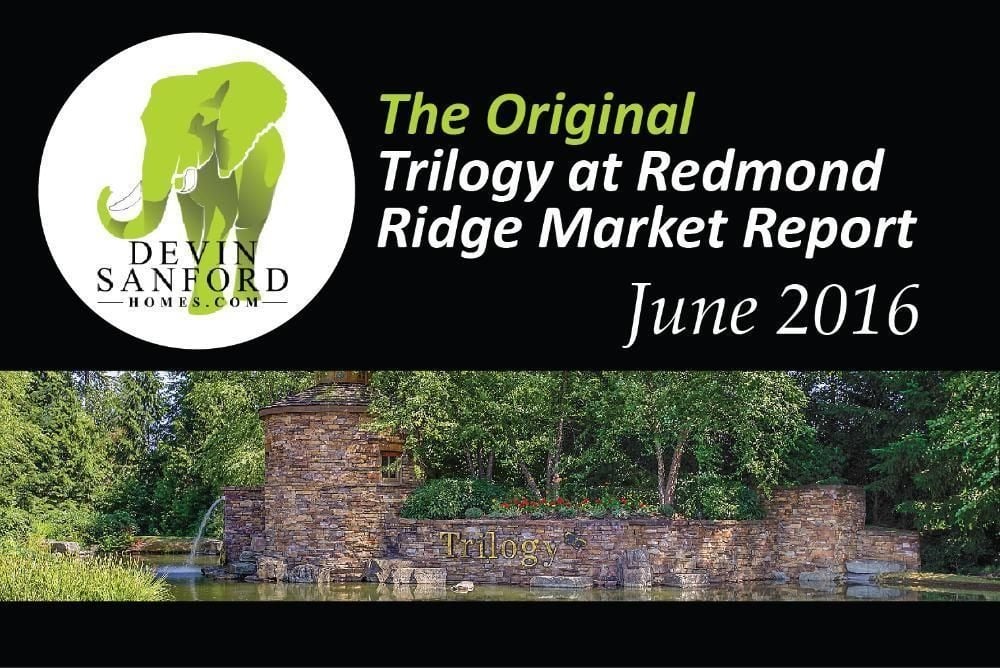 Homes in bold & green indicate the Elephant is working for our Sellers.

Wow, is all I can say. Never before has Trilogy at Redmond Ridge had 20 resale homes sold in one month, making June, 2016 our biggest resale month ever. During June, the four major Puget Sound Counties, too, have experienced their biggest sales numbers since 2005. Back in Trilogy’s Hay Day of new home sales, 20 was not that uncommon with 32 being the largest number this former Community Representative can recall. During that record setting month in 2004, Six of us were running footloose and fancy free without a Sales Manager. It was Bjorn Stehr, Wendy Fellers, Janet Francis, Ron Denny, Sarah Screen and yours truly. I must admit, working with Trilogy Home Owners and prospective Buyers these days is much more fun than the best days ever under strict guidelines. Serving and saying, “Yes” is greatly more fulfilling than Selling and being forced to say “No” too often.

12 “Pending Sales” during May and quick turnover during June are greatly responsible for the enormous month. 18 of the 20 sales came on and off the market in less than two weeks. Ten of those, in less than a week. Also, I’ve mentioned in prior articles, “The word is out. Trilogy is a great place to live.” Now we are seeing a snowball effect of one or two sales by a new to the neighborhood Broker leading to more interest in doing business here. Why not? The homes are beautiful, the lifestyle is unmatched in our area and the people are friendly. There were 29 Brokers involved on one side or the other of the month’s transactions. The activity is exciting and is a big reason for the big number for June. The Elephant was blessed with over 20% of the business, gratefully. Trunk it!

There’s a new status with the Northwest Multiple Listing service now. It’s called “Sold-Unlisted.” Before we had “Active”, “Pending Inspection”, “Pending” and “Sold” as the main statuses. March 9th a new rule came about to circumvent the skewing of sales statistics. Simply put, sales off the books are now to be reported.  I’ve single starred (*) two Sold-Unlisted sales for June. These sales should be rare and include “For Sale By Owner” sales where a Broker is representing the Buyer or “Seller Representation”. Seller Representation should only be a case where the Seller has procured a Buyer on their own and simply seeks out a Licensed Broker to write up the paperwork for a fee. Pocket Listings are still very much forbidden and fineable with the NWMLS. A pocket listing has some gray areas and basically, means that a Broker has signed up a Seller but is holding the paperwork within their own office or person and is not exposing the Seller’s property to the thousands of other Licensed Brokers or their potential buyers. The Elephant’s advice, “If approached by an agent who says they have a buyer for your home, be sure and do your research on pricing and the Broker.” You may be better off hanging the sign out front, especially with today’s lack of inventory.  Give me a call and we’ll get you top dollar.

Noteworthy and double starred (**), are three sales in particular. At the half way point for 2016, the sales of the “Sammamish, Alder and Oakwood” are the first of their respective floor plans to close this year. The “Sammamish” is very rare as it sits on the same foundation as the much more popular Union floor plan. Most, who walked the Annex Gallery for the Lakes Collection chose the Union over the Sammamish. There was no model at all for the “Alder” and the “Oakwood” was presented, a good portion of the new home sales era, as a display of construction methods.  There were two Alder sales in 2015 and zero of the others. The Sammamish was Sold Unlisted.

A Dozen Homes Buzzin’ in the Pending Category

Homes in bold & green indicate the Elephant is working for our Sellers.

The average days on market for Sold homes in June was nine, the Avg. D.O.M. for Pending homes (more recent sales than Pending Inspection homes) was 12 and the Avg. D.O.M. for Pending Inspection homes (most recently written agreements) is 22. The numbers don’t lie; things are slowing down. It’s typical for July and August is a big gear down month annually. The average days on market for available inventory? That would be 50!!! More on that later…

There’s an extremely quick turn-a-round for homes between $400K and $600K, which would include, primarily the “Port Collection” and “Lakes Collection”, and possibly a modest “Island Collection” home may qualify.

Note: All currently available listings are posted at www.DevinSanfordHomes.com on the home page.  Just scroll over to the Trilogy tab and select “Current Trilogy Listings” from the dropdown list. For all listings, “Click” the big green tab to the right.  It says, “View all Trilogy at Redmond Ridge Listings.” Within this report, we share what is available at the first of the month for consistent and measurable
month over month reporting.

June 1st available homes have been on the market over four times longer than the Sold homes for the month and over five times longer than those currently Pending (more recent contracts). This may be an indication that the pent up demand for upper end homes has, perhaps, eased.  Several “Estate Collection” home sales well over the Million Dollar mark early in January, February and March shocked the community. The excitement seemed to have created a flurry of upper end homes hitting the market and prices drove up across the board. Many were successful in capitalizing on this window of opportunity. As with good runs in the stock markets, housing too, can only tolerate so much. As usual, the less expensive homes become more attractive and pricing continues to rise. I would expect that lag to catch up soon and to see some necessary price reductions at the upper end almost immediately.

CoreLogic, a prominent real estate analytics company, recently reported Washington State has the fastest rising home prices in the United States. We cannot sustain this level forever.  Notwithstanding, there’s about three weeks of Inventory in King County and maybe, half of that in Trilogy. If your home is sitting, in this market, there’s a reason. Trilogy is a different animal. If 50 days doesn’t prove that, I don’t know what ever will.

Although, July and August gear down, as mentioned prior, September usually gives one last surge in Trilogy prior to the rains of October and upcoming Holidays. There’s still time to jump on the gravy train. Properly priced homes should bring one or more prompt offers for any properly presented Trilogy home but it’ll take a well-versed Trilogy Expert to make it happen. I happen to know one intimately. The Elephant has 13 years of experience in the Trilogy trenches. If you’re thinking of selling, whether a day or a year from now, I’d be happy to meet with those who are seriously interested in the best results possible and listing The Elephant Way.

After writing this month’s report, I read the July 7th News Release from the NWMLS. It was refreshing for me to read that other experts are saying exactly what I’ve written here. I think this is the first time I’ve mentioned the NWMLS monthly report. I do so because I think it’s very important for me to encourage you to read this month’s News Release titled, “Market Showing Signs of Adjusting.” It reports local statistics, expert opinions and even gives a brief about how Brexit may affect our national and local economy. Look for it along with this “Original” Trilogy at Redmond Ridge E- Market Report or, from snail mail, click on my blog for a link to the article: NWMLS Article CLICK HERE

Take a quick look at this recap of home statuses so far Year to Date:

That’s a wrap for June and Mid-Year.  We hope you found something of value in this report and will give us a call when you have a real estate need. We measure our success by how well we serve others.

Did you know?  The Elephant Serves Buyers and Sellers Outside of Trilogy?