When You Hire a Premium Broker, You can Expect a Premium Price, Not a Premium Fee!
Don’t fall for discounts and short-cuts with your most valuable asset. Call Devin Today

Here are the Homes that Closed Escrow during September.

Each Collection of homes experienced closings during September given one, The Island Collection. A modest yet tidy Townsend, connected to the neighbor and close to the Club, started  pricing out at $555,000. A $1,180,000 Golf Course Maple topped the charts but not until after an ultimate drop of $95,000. That’s nearly an 7.5% concession with the Listing Brokers touting a 2% savings on their fee. Other high-end homes struggled, as well, including an Alder, a Maple and a Monticello, all with shocking six-figure final discounts. Two of them were listed by long-time, well-known Trilogy Resident or Former Resident Brokers.

The average days on market for sold homes were 88. The average Sales Price among the nine homes listed on the Northwest Multiple (the 10th home sold off-market) was just 92.91% of the original asking price. Only one home sold for 100% of asking and it was the smallest square footage of the group. Without it, the percentage was lower. During August, Sellers realized just shy of 95%, July, nearly 99% and the prior two months, 100% of asking price. There’s been a steady downward trend over the last few months, but that should correct itself as Realtors and Clients come to terms with the new reality. We can no longer overprice and expect to get it. Even so, most of you have been in your  homes long enough, you’re still reaping a very nice chunk of equity to take wherever you’re going. When you get there, I think you’ll find it’s all relative as the correction is not targeted solely at Trilogy.

Here’s what Uncle Sam is Waiting to Collect Excise Tax on.

Nine of the 13 Pending sales from last month, going through the Title and Escrow process, received recording numbers during September. They brought our  total closings to 60 units to date, down over 27% from last year. This may affect the bottom line for working capital with the Association thus an increase in dues for 2020 would not surprise me.

Remember, this inventory is as of the last day of the month. It’s an accurate way to review sales month over month. 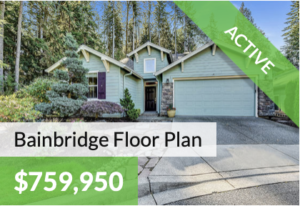 Well, try saying “Seven Sole Sellers Seeking Sold Strips” five times fast! How’d you do? Better than me, I’m guessing. Inventory is low and, for the selective Buyer, perhaps slim pickings’ right now. With rare exception, anything seven figures has been slow moving this year. I’m certain it’s had something to do with that magic nine-hundred ninety something figure I spoke of last month. Getting a home under a million, if you’re anywhere close, is a good move. If you’re above that, it’s a matter of the right buyer coming along in time. Including one very poor presentation, days on market are up there and all the available plans share some kind of a challenge, whether it be a rockery or road behind, an attachment to another unit situation or even an income restriction, such as the ARCH home listing.

Is Now a Good Time to Sell My Home?

I say, “Absolutely” for most situations, it’s a very good time to put your home on the market. We’ve experienced our pricing correction already. Inventory is low and desire is still reasonably high for would be purchasers. You have little competition and you can probably figure your home has risen in value about as high as it’s going to go for a while. For years I’ve been reporting  that the Trilogy market is dead after the first week of November. I believe that won’t be the case this year. The inventory was so low for most of the year that there are still plenty of Buyers waiting for the right home to come on the market. They’re behind in their plans and may not want to wait until Spring.

The disappointing part has been that too many over-reacted to the market correction, Brokers and Sellers alike. Some big changes weren’t necessary. Six-figure price drops by Sellers and less experienced Brokers was a definite knee-jerk reaction. Now we need to find stability again. A decade ago, the Elephant and a few other Resident Brokers helped to establish a baseline for pricing among each collection. It took two or three years but, as newer Resale Agents to Trilogy began to emulate pricing, we did manage to establish those baselines, leaving fits and finishes and location the only variables. I wrote about it often back then and you could see how we set the bar for nearly each floor plan.

I’ve answered many phone inquiries from Real Estate Appraisers helping them to understand the difference between, not only values for like-kind Trilogy homes versus other neighborhoods, but the variables in location and orientation. They’re still calling me regularly. The Trilogy Financial Committee contacts me every year for projections, as well.  It took me many years; something you don’t learn in two, three or even five or more years.

A Trilogy confidant shared with me they’ve been seeing “The Trilogy Experts” displayed on Realtor sold strips on yard arms recently. Experts? Really? Three years, never working for the Developer does not an expert make.  I’m quite certain I could ask them a multitude of questions they don’t have answers. What does this have to do with whether you should sell your home or not? The answer is, yes, it’s a wonderful time to sell, however, in this very changing market, I highly recommend you give the Elephant a call. He has 16 years’ experience in Trilogy and had an award-winning career selling and training for the developer, Shea Homes, Inc.. He’ll get the presentation and the price right.

With all the newcomer Brokers to Trilogy, pricing is all over the place. It seems, even the Brokers we’re familiar with are pricing similarly to what they observe around them. Some of you may have noticed they’re not working as actively as in prior years. There’s nothing wrong with that. The time comes for all of us. However, we are in the middle of a paradigm shift for Sellers and paying incredibly close to what’s going on daily, is very important for accurate pricing right now. The Pachyderm works full-time.

Yes, sell, sell, sell if that’s what you wish to do. However, hang a sign out front with the brand of someone with honest to truth expertise in Trilogy and reap what you’ve sewn.

We truly hope you’ve found something of value within this report.

Thanks so much for reading!

The Pachyderm and Support Team

GET THIS REPORT FASTER!! Sign up to receive our E-Market Report over the Internet at www.DevinSanfordHomes.com.  You may request to be included by emailing me at [email protected], as well.