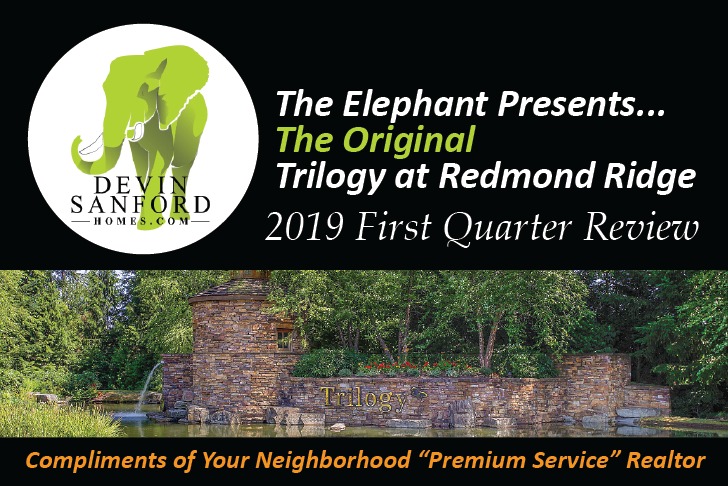 Things started about half as fast as last year with only two closings in January. The unusual cold and snow were sure to have much to do with the lack of activity.

The first sale of the year was an original model home, the Madison. I was surprised, it didn’t bring a premium price. Perhaps, the fact that it was the model home, could have been played on a bit more. The next Madison to sell was attached on a common wall, as well as the garage and was far from the club, yet sold by yours truly for $682,000. The second sale of the year was off-market and was served with a Pachyderm punch, setting a record on price for any production home since the beginning. Savvy Sellers and mutual Broker respect played a strong part. I typically, am not an advocate for home owners selling off the market because usually, the Brokers aren’t that experienced in Trilogy and the home should have more exposure.

Speaking of selling unlisted, I have a retraction, by the way. Our 2018 Year in Review reported there were no Sammamish sales during the year. That was incorrect. I, mistakenly, reported one too many Discovery sales. MLS #1286620 was a Sammamish, not a Discovery, and sold off market.

The Sammamish was nicely appointed and perched above the wall on Adair Creek Way. Our Hemlock was nicely upgraded and had the fortune to be inhabited by quite the Handyman. It had all the crown molding and trick gadgets, along with a dramatic pond and a partial mountain view. The higher priced sat on the 17th Fairway. The Monticello is a very lovely home with several custom built-ins ,is immaculate and backs to the Forest on Twinberry way. I mentioned  “taking a swag at pricing” in my last report of 2018. That’s what we did here.  Our Sellers’ new residence was not ready for occupancy and they didn’t want to move twice. I don’t blame them. We took a shot at similar pricing  to a couple of inferior Monticello plans that had closed just previously and played the price-drop game. Unfortunately, the Buyer Market was depleted  for a bit. We still realized in excess of what I had originally assessed home value at being and the Sellers are  happy campers.

The Chelan is a nicely appointed home and, backing to Trilogy Parkway, may have set the price basis for entry into the community. It sold quickly. The Vashon Owner passed on yours truly for a 1% discount under my traditional fee. The home stayed on the market with a well-known Resident Broker , for over five months, incurred staging costs and closed for more than 5% under the asking price.

The Whidbey is nice enough and a block from the Club. It was way over-priced to begin with at $799,500 and, after a reduction to $775k was cancelled for unknown reasons. It was picked back up by a second Resident  Listing Broker and priced at $759,950 only to drop to $750K and, ultimately closed for $725K after 168 days on market. Proper pricing promotes a quicker sale and prevents stress.

The old parity holds true, even for me and mine. If the price is too high to begin with, you’ll waste time and money.

Hemlocks dominated Escrow ranging from a modest yet well displayed $875K,  to over a million dollars for an upgraded model  a stone’s throw from the Club.

February sales, although modest, doubled January. March sales were four times, and the Pending homes under contract, are piling up. Will we see eight times January or 16 for April? It’s possible, depending upon how quickly new listings turn over. Stellar homes sell fast. Average homes require the turning over of stones; a task few listing Brokers do well, but that work is paramount in this changed market place.

Observe the month over month days on market. Although sales are on a typical incline, so is the  time on market. As a result, inventory will grow, and supply and demand will come into play. When that happens, Buyers can be more selective or will tend to make less than full-price offers for less than spectacularly presented homes. Preparation and presentation are increasingly becoming more important if you’re expecting top dollar. That’s why the Elephant is getting busier.

Here’s what Uncle Sam is waiting to collect on…

There’s a lot of year left and, certainly, the activity has begun to increase but we did have a very slow start. The Inventory for January began with mostly listings lagging over from the prior year. Weather extended their days on market for some, for others, with poor presentations or ridiculously high asking prices, it wouldn’t have made a difference. They continued to drop asking prices and remained on the market. Some were presented well but even that’s not enough. It’s a much more neutral market now. Everyone knows it. Brokers are going to have to get on the phones and follow up; make it happen, if you will. I’ve been hired being told, “I heard you get it done!”

I like that and you can count on it.

For a well prepared and presented home, yes, and  priced properly, patience is a virtue. If you’ve performed those P’s , sometimes it’s just a matter of waiting for the right rear-end for the seat, if you will. I’m not saying hang a flippy flyer and a yard arm and wait for a contract to arrive all gift wrapped. Unless you have an exceptional property, those days are over. What I’m saying is, if you’ve done those things, and your Broker turns over every stone, it’s usually not the price. It’s understanding the needs of the Prospect and building that relationship through the Broker. Then, the offer will come with terms that are amicable each party.

After a very quiet period of low activity, BAMB, six homes went Pending Inspection between March 26th and March 29th. Hooray, the new year was finally here! Interestingly  enough, only one of those homes had an asking price over $800,000, the rest were much lower. Among Broker chatter, we agreed  the lesser priced home Buyers were coming in with low-ball offers only to find them turned down or counter-offered much higher. Some stuck and some didn’t. We believe it could be an indication that the lower end Buyer is being  forced to the top of their budget.

On the other end of the spectrum, the recently very sluggish upper end busted wide open . Finally, those with the big check books quit clinging to them so tightly and six of the fourteen sales year to date have been well in excess of the million-dollar mark.

An Even Dozen Available for Sale

The market has changed but it’s still good. In fact, I think it’s better. The frenzy is over ,and people’s heads can quit spinning. Good common sense and careful planning are back in play.

I often will search Zillow for a quick photo or information about an address. It’s a good source for photos, County records and sales history. Not all homes have been listed on the Northwest Multiple but they’re all on Zillow. The largest real estate statistical company in the country, keeps a graph of the market for any home. It tends to run consistently the same, regardless of neighborhood , due to the strong economy in our area.  The bar graph runs from Sellers on the left to Buyers on the right and, for the last few years, the bar slid to ”HOT” for Sellers, pretty much every time. A  few months ago, it moved to “COOL” just as consistently. Today, the market for Sellers and Buyers reads, “Neutral”.

Buyers aren’t writing offers without an inspection contingency any longer. Transactions are more arm’s length now. They have a willing Buyer and a willing Seller and are going to require knowledge and time by an experienced negotiator if Sellers are not going to leave money on the table. Three  things will be paramount if you want to stand any chance of getting your asking price. You’ll need a stellar presentation and help from someone who practices that on a regular basis. You’ll  need to price the home to the level of what you’re offering, and you’ll need a strong negotiator. Elephants have a trunk for lifting people up, big ears and brains and are hard to budge.

Thanks so much for  reading.

One of our Five Star Zillow Reviews

“I decided to use Devin after receiving his quarterly updates
on home sales in Trilogy. He appeared to be very
knowledgeable about home sales here in Trilogy and able to
articulate them to both buyers and sellers. I was right.
Devin sold my home in a difficult market for sellers for over
asking price in about 20 days! He made several great
suggestions on things to do for staging and I followed every
one of those suggestions. He supplied some services and
helped me find others who could do what had to be done.
Devin’s market knowledge is second to none. He negotiated
several buyer requests with a keen understanding of what is
needed to make a deal work here in Trilogy. His team is also
first rate. I can’t say enough good things about my
experience with him and his team.”
Gregory Powers – Redmond, WA