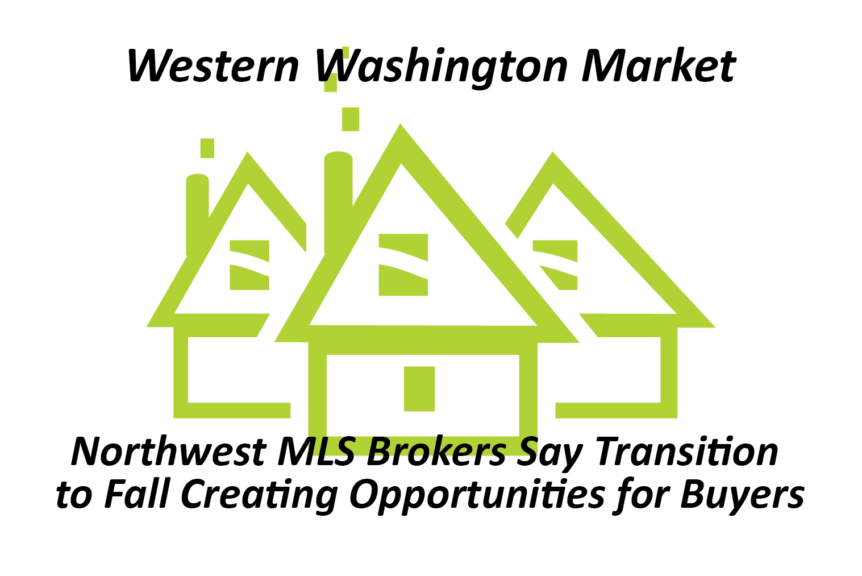 “The transition into the fall housing market creates opportunities for homebuyers,” suggested J. Lennox Scott, chairman and CEO of John L. Scott Real Estate. “Although there are fewer listings than what buyers find during peak summer months, there is also less competition” for the available inventory, he added.

While the intensity of sales activity is typically lower for new listings in the fall and winter, Scott noted “It appears we are headed toward a more intense winter market than last year.” He said he expects the number of unsold listings will continue to decrease once the winter “clean-up” of inventory begins.

At the end of September, MLS brokers reported 15,982 total active listings, down more than 18% from the same month a year ago when the selection totaled 19,526 listings. Only three of the 23 counties served by Northwest MLS – Clark, San Juan and Whatcom – had year-over-year gains in inventory, while 18 counties had double-digit drops. Thurston County reported the sharpest shrinkage, at nearly 35%.

“September’s housing market was a bit of a roller coaster, up in certain areas and down in others,” commented OB Jacobi, president of Windermere Real Estate.. Within the four-county Puget Sound region, Pierce County prices rose more than 10% thanks to high demand and low inventory, he noted. “Buyers continue to be drawn to the area thanks to more affordable housing costs, but this influx is also driving up prices,” he remarked.

“In King County, prices were down nearly 2.7% while pending sales rose nearly 10%. This tells us there is no shortage of buyers in the Greater Seattle area,” stated Jacobi. He also said home prices normally start to taper off this time of year, “so this isn’t a major cause for concern.” Within King County, prices rose in four of the six sub-markets; only Seattle (down 3.2%) and Vashon (down almost 28%) reported drops.

The median price for single family homes and condos that sold last month in King County was $593,750, down from the year-ago figure of $610,000 and the first time it dipped below $600,000 since January. Three other counties, Okanogan, Pacific, and Clallam, also reported year-over-year price drops. Joining Pierce County with double-digit price increases from a year ago were eight other counties.

“Home prices have stabilized, creating good opportunities for purchasers,” said Dean Rebhuhn, the owner of Village Homes and Properties in Woodinville. He expects prices to stay stable through the fall and winter markets.

The latest report from Northwest MLS shows pending sales were up about 9.8% from a year ago, with mutually accepted offers rising from 8,913 to 9,785. In the four-county Puget Sound region, Snohomish reported the largest gain at 18.3%, followed by Kitsap at nearly 11.9%, King at 9.8%, and Pierce at 5.4%.

Brokers were unable to replenish inventory to match demand as the volume of pending sales (9,785) outpaced new listings (9,435).

“Things were a bit different in September, but at this point it’s difficult to know if it’s an aberration or an actual trend,” stated Coldwell Banker Bain president and COO Mike Grady, pointing to “far fewer” new listings that were added last month compared to a year ago. Area-wide, Northwest MLS brokers added 9,435 new listings last month, a decline of 1,023 from the year-ago total (down nearly 9.8%).

“It’s still a seller’s market, and for more than a year we’ve seen only 1-to-2 months of inventory, so I’m starting to think we may be looking at a ‘new normal’ in relation to what a balanced market looks like,” commented Grady.. “With the international economy and trade issues continuing to be erratic, and interest rates staying low, these pressures will almost certainly be an influence, yet there’s no clear answer to how all of this will play out,” he added.

Northwest MLS director Frank Leach, broker/owner of RE/MAX Platinum Services in Silverdale, said Kitsap County continues to have constrained inventory (down almost 25% from a year ago), with values stabilizing or increasing slightly. Homes priced around $350,000 and under sell quickly, while “inventory in upper ranges is taking a little longer to get traction and move to a sale,” according to Leach.

Leach noted condominium inventory in Kitsap County rose more than 27% from a year ago, but the selection of single family homes dropped by the same percentage. He said several multifamily projects in the county have been submitted or approved, and those homes are expected to be absorbed in the market as soon as they’re available.

“Prices along the I-5 corridor between the Puget Sound and Portland once again outperformed as buyers seek value for money and job growth has expanded in the entire region,” observed James Young, director of the Washington Center for Real Estate Research (WCRER) at the University of Washington.

If millennials want to own houses, Young said the logical first step in the housing ladder is increasingly outside of King and Snohomish counties “and further afield along the I-5 corridor.” With interest rates near historic lows and employment levels at historic highs, first-time homebuyers are acting while they can to get on the housing ladder, “even though that may mean long commutes,” Young stated.

Northwest Multiple Listing Service, owned by its member real estate firms, is the largest full-service MLS in the Northwest. Its membership of around 2,400 member offices includes more than 30,000 real estate professionals. The organization, based in Kirkland, Wash., currently serves 23 counties in the state.