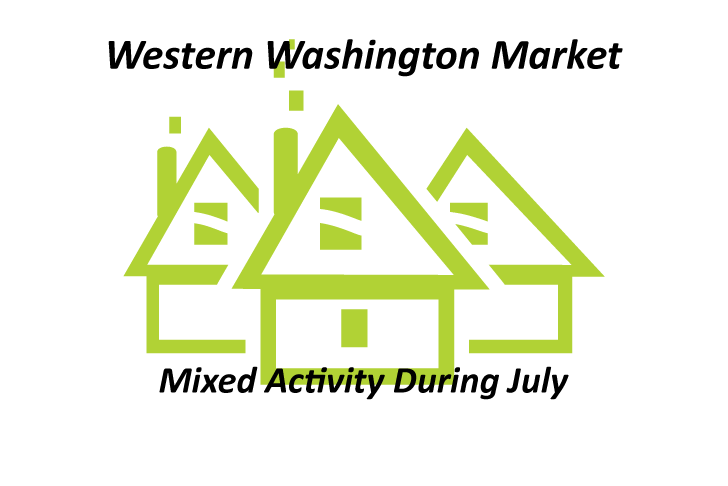 A closer look at new listing activity shows last month’s total was down from both the previous month (-6.7%) and the same month a year ago (-8.2%). The total number of active listings of single family homes and condos, at 16,787, was about the same as June’s inventory (16,680) and the selection of a year ago (16,773 listings). A comparison of the 23 counties in the Northwest MLS report shows about half the counties have more inventory than a year ago, and half have less.

System-wide there is 1.76 months of inventory, with King, Kitsap, Mason, Pierce, Snohomish and Whatcom counties all reporting less than two months of supply.

Closed sales were up from both the previous month and the same month a year ago. Northwest MLS brokers tallied 9,540 closed sales last month-the highest volume since June 2018 when they reported 10,072 completed transactions.

Year-over-year (YOY) prices rose nearly 3.6%, but declined about 2.9% from June. The area-wide median price for July’s completed transactions was $429,900; a year ago it was $415,000. Eighteen of the 23 counties in the latest report showed year-over-year price appreciation.

The median price of a single family home (excluding condos) that sold last month was $440,000, up 3.5% from twelve months ago. Only four counties reported year-over-year price drops, including King County where prices were down 2.7%. Condo prices also sagged compared to a year ago, but by less than one percent. The area-wide median price for condo sales that closed during July was $350,000.

MLS director John Deely, principal managing broker at Coldwell Banker Bain in Seattle, described King County’s residential market as “balanced on a fulcrum between growth, stagnation, and decline.” New listings of single family homes (excluding condos) in King County dropped year-over-year and when compared to last month, he noted. Total active listings and pending sales both improved from a year ago, but slipped from June’s totals.

“The lazy days of summer do not apply to home sales,” said J. Lennox Scott, chairman and CEO of John L. Scott Real Estate. “Each summer, the highest numbers of homes go under contract per month. However it may feel slower because the greatest numbers of new listings also come on the market. This creates disbursed buyer energy,” he stated. Looking ahead, he expects “strong numbers” due to “interest rates in the upper threes, strong local job growth and sunny weather.”

“Kitsap County continues to be a draw for those looking for affordability and economy,” stated Frank Leach, broker/owner at RE/MAX Platinum Services in Silverdale. Inventory is tight and new construction continues to be strong countywide as builders work to keep up with demand, he reported, adding, “Building permits for both single family and multi-family housing units are at a 10-year high.” Builders’ inventory is selling very rapidly, he noted.

Leach, a member of the Northwest MLS board of directors, described condominium sales as “very healthy,” as inventory improves. Year-over-year condo sales in Kitsap County surged nearly 39%, with prices jumping nearly 21%. Additionally, Kitsap is growing its rental market, notably on Bainbridge Island and Winslow, according to Leach.

“With interest rates holding at below 4% we anticipate the market will be running very strong and fast through the winter of 2019 and into 2020. Now is the time to buy, sell, move up or move down, but be realistic about where the values are,” Leach said, adding the “bulk of well priced homes are selling in less than 30 days.”

“Coastal counties and counties surrounding the Puget Sound (outside of Seattle) continue to see strong price increases,” remarked James Young, director of the Washington Center for Real Estate Research (WCRER) at the University of Washington. “There seems to be a lot of out-of-state interest in these markets given changes in tax laws that make Washington a relatively good place to retire, especially compared to California.”

Commenting on YOY price increases in three counties-Jefferson (up 26.4%), Mason (up 19.3%), and Pacific (up 20.1%)-Young said there is “massive interest from out of state buyers and Seattle residents looking to trade down.”

Young believes the rising number of condominium listings in King County (up 39% YOY) “point to increased regulatory uncertainty in Seattle surrounding rental properties and the possible outcome of upcoming elections. Many are calculating that it is better to sell while the market is strong rather than take a chance on new ordinances that threaten their investment returns,” he stated.

Also somewhat concerning to some industry experts is the market’s “muted” response to cheaper mortgages compared to previous periods when rates fell.

An analyst with Moody’s (a credit ratings and financial services company) observed the sharp drop in mortgage rates has not provided “much of a lift” in sales in many parts of the country. “In general what we’ve had is just not enough lower-priced homes and sort of a vicious cycle where that limited supply has continued pushing prices up,” explained Jody Shenn, who covers the housing and mortgage industry for Moody’s.

Nonetheless, in an interview with The New York Times, Shenn stated, “It’s not that the decline in interest rates doesn’t matter at all.” The drop since late 2018 to 3.75% has knocked about $160 off a monthly mortgage payment on a $286,000 home – the median price of existing single family homes in June, according to the National Association of Realtors, she explained.

Analysts have acknowledged applications to buy homes and refinance mortgages seem to be rebounding somewhat since last year’s slump, while noting it is possible the drop in mortgage rates might simply need more time to influence activity.

Northwest Multiple Listing Service, owned by its member real estate firms, is the largest full-service MLS in the Northwest. Its membership of around 2,300 member offices includes more than 29,000 real estate professionals. The organization, based in Kirkland, Wash., currently serves 23 counties in the state.