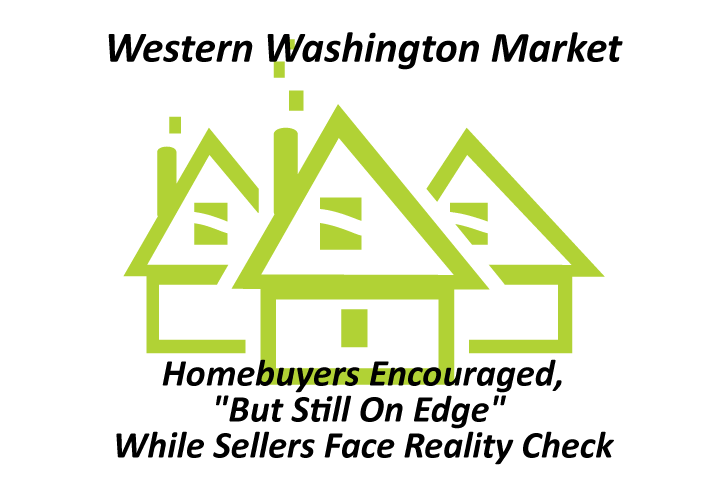 KIRKLAND, Washington (August 6, 2018) – “Home sellers throughout the Seattle region are experiencing a reality check and the days of multiple offers are days of the past,” was how one director with Northwest Multiple Listing Service summarized the market upon reviewing the statistical report for July.

New figures from Northwest MLS show year-over-year improvement in inventory (up 6.5 percent), but modest drops on both pending sales (down slightly more than 7 percent) and closed sales (down 3.4 percent). Despite those drops, prices rose 8.64 percent across the MLS service area that spans 23 counties.

Several industry leaders commented on the steadily improving supply. The number of active listings system-wide totaled 16,773 at the end of July, the largest volume since September 2016. System-wide there is 1.8 months of supply, the highest level since October 2016.

“In Seattle and King County supply is at the highest level since first quarter 2015, which has me thinking about the longevity of seller luxuries like offer review dates, pre-inspections, and escalation clauses,” remarked Robert Wasser, owner of Prospera Real Estate and an officer of the Northwest MLS board of directors. “People are taking notice of the evolving real estate landscape — even my mom tells me she’s noticing more for sale signs!”

“There continues to be better news for buyers,” agreed Mike Grady, president and COO of Coldwell Banker Bain. He noted the inventory in King County has doubled since March from 0.8 months to 1.5 months of supply, but added “While this is significant, we are still well below a balanced market of 4-to-5 months of inventory.”

King County’s number of active listings surged nearly 48 percent from a year ago, rising from 3,465 active listings to 5,116. Snohomish County also had double-digit increases, up nearly 15.8 percent, but 15 counties reported less inventory than twelve months ago.

“It has been a long time coming, but we finally have some solidly good news for buyers in the Puget Sound area,” commented OB Jacobi, president of Windermere Real Estate. He noted the number of single family homes (excluding condos) for sale in King, Pierce and Snohomish counties in July was up 10.4 percent compared to June and up 20.5 percent year-over-year. “The increase in listings is clearly having a calming effect on prices while also giving buyers in the region somewhat of a reprieve from the frantic market of months past,” added Jacobi.

In his comments about sellers experiencing a reality check, broker Keith Bruce suggested Seattle is experiencing a self-corrective shift in the market. “Many sellers are reaching for their dictionaries to understand the words ‘price reduction’ and ‘increased market time.'”

“Sellers need to put away their dictionaries, take a collective deep breath and enjoy the ride. Listing brokers need to be as honest as possible with sellers and not promise multiple offers or huge price escalations,” suggested Bruce, adding “We are still a seller’s market. Much more inventory is needed to meet the overall demand for quality homes in Seattle.”

“Seller gridlock has loosened close to the job centers,” stated J. Lennox Scott, chairman and CEO of John L. Scott Real Estate. “While we are experiencing record sales activity for the higher end and luxury markets in year 2018, a record number of new listings is coming on the market in these price ranges. This has resulted in more opportunities for home buyers and lower premium pricing from the spring market.”

Northwest MLS data shows a 32.5 percent increase in the number of homes that sold for $2 million or more so far this year compared to the first seven months of 2017 (up from 477 to 632 closings of homes and condos in this price segment).

George Moorhead, designated broker at Bentley Properties, is noticing an increase in the number of price reductions for actively listed homes as inventory increases, “even in the hotspots in Seattle and the Eastside. We are seeing a continued shift from move-up and luxury home buyers to more first-time buyers, which is consistent with the flattening trends we are seeing in today’s market.”

MLS director John Deely said the change in the market “is more accentuated this year by the historically low inventory that we have been experiencing over the past several years. What now seems like a meteoric increase in inventory is in part caused by the many potential sellers who have been on the sidelines that are now coming to the market,” added Deely, the principal managing broker at Coldwell Banker Bain’s Lake Union office.

MLS statistics show pending sales declined from 11,800 a year ago to last month’s total of 10,965 for a drop of about 7.1 percent. New listings eclipsed pending sales by a margin of 1,233 units, easing some of the pressure on inventory.

“Even with an improving buyers’ market, our agents are telling us that buyers seem to have taken a bit of a break: instead of 20 buyers looking at new homes on day one, there were only 10 is the comment we’re hearing,” noted Grady. “While we may be lifting the pedal from the metal, we remain very much in the left lane, exceeding the posted speed limit by a significant amount,” he remarked.

Scott agreed, saying “For homes priced below a million dollars, the sales intensity for new listings has come off the extreme frenzy in the spring to just frenzy.”

Closed sales slipped about 3.4 percent from a year ago, declining from 9,707 completed transactions to 9,379. Nevertheless, the median selling price increased $33,000 (about 8.6 percent) from a year ago, although three counties experienced declines. The median price on last month’s completed sales of single family homes and condominiums was $415,000. Compared to June, the median price dropped $10,000.

Prices for single family homes only (excluding condos) rose about 8.4 percent, with a dozen counties reporting double-digit gains. Condo prices increased about 10.2 percent. In King County where more than half the condo sales occurred, price jumped about 12 percent from a year ago.

“It’s not such a crazy, go-go market, but it’s still a great time to be a seller,” stated Northwest MLS director Mike Larson, president of Allen Realtors in Lakewood. “The expectation of multiple offers and the ability of sellers to simply dismiss inspection repair requests is behind us,” he believes. “Sellers need to understand that and find a listing broker who also understands that,” he emphasized, adding, “The days of doing a market analysis and then pushing the envelope on the list price an extra 5 percent are gone. Ultimately, I think that’s healthy for the market,” Larson commented.

Considerable variation exists among the counties, whether measured by listings, sales or prices.

“The real estate market has cooled a bit in Kitsap County with pending sales off 10 percent in July compared to a year ago,” reported Frank Wilson, Kitsap regional manager and branch managing broker for John L. Scott Real Estate in Poulsbo.

“Yes, the Kitsap market has slowed a bit but it’s still hot due to the persistent shortage of inventory, which is down nearly 21 percent from last year. When 575 new listings come on the market and 596 listings go pending, you know inventory is not building,” explained Larson, a board member at Northwest MLS.

Wilson also reported strong open house traffic as “pent-up buyer demand rallies the pool of buyers for each new listing.” When a broker arrived for the open house he had scheduled for a new listing, six cars were waiting. “By the time the open house concluded, more than 30 people had toured it. Eight offers were made and it sold for more than list price,” he commented.

In Pierce County, inventory dropped around 3.4 percent, and brokers reported more pending sales (2,012) than new listings (1,990). Year-over-year prices in that county were up nearly 14 percent.

“Pierce County has, for a handful of years, been the affordability solution for buyers who would otherwise buy in King County. I think the craziness of the King County market has magnified that fact even more. Buyers are willing to spend two or three hours in their cars each day if it means buying twice as much house,” reported Larson.

Dick Beeson, principal managing broker at RE/MAX Professionals in Gig Harbor echoed Larson. “The market in South Sound is bolstered by the reality that our houses are cheaper. That fact alone keeps our inventory, our number of pending sales, and our number of closings similar to last year even though we’ve faced higher interest rates.”

Beeson said multiple offers continue to follow homes that are well priced at or below our median price level. “If a property stays on the market more than 14 days, you know you’ve got a price problem. It’s that simple.”

Buyers are still on edge according to Beeson. “They know they will be competing with other buyers at some level – whether on price, shorter inspection times, larger earnest money deposits or fewer repairs being done by sellers. For buyers, it’s better than before, but before was just insanity. Buyers are still insecure about prices, financing and competition.”

Moorhead described the market as still “quite strong,” but projects a continued flattening of activity, due in part to looming concern that mortgage rates will rise again this quarter. “Some buyers have thrown in the towel and have chosen to lease for the next year to save for a larger down payment.”

The volume of pending sales “at or above post-recession highs is an indicator of a healthy volume of sales still moving through the market. We are seeing investors, speculators and builders reacting to the market change by bringing excess inventory to market,” said Deely.

“Getting back to a balanced market creates a healthier and more sustainable market,” Moorhead stated. He believes there has not been a better time in the last three years for a buyer to enter this market with more options and less competition.

Scott agreed, stating “for home buyers the next three months will be the best time for selection and availability of new listings until March 2019.”

Grady and Moorhead were more cautious.

“An 8.64 percent increase in median sales price compared to last year is still much greater than inflation,” Grady noted. “In the long term this is only sustainable in a growing employment market like we have in this region. Consider that through May more than 30,000 net new jobs have been created in just the Seattle-Bellevue area.”

Larson noted a shift in investors in rentals. “Our firm’s inventory of rentals has decreased about 15 percent over the past few years, from around 350 to under 300. Many of those owners bought rentals in the last boom market, and then weathered the storm when the market crashed. They finally have equity again and want to get out, which isn’t surprising.”

Northwest Multiple Listing Service, owned by its member real estate firms, is the largest full-service MLS in the Northwest. Its membership of around 2,200 member offices includes more than 29,000 real estate professionals. The organization, based in Kirkland, Wash., currently serves 23 counties in the state.