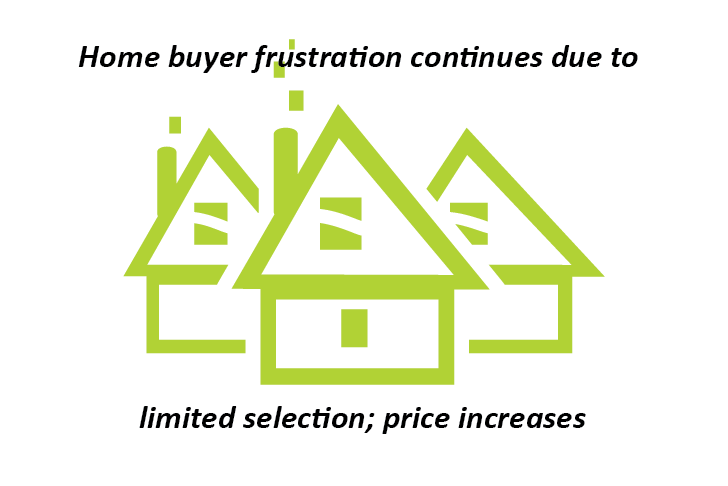 KIRKLAND, Washington (Jan. 5, 2017) – Like many other months of 2016, December was frustrating for buyers across Washington state as they encountered depleted inventory and rising prices. Post-election hikes in interest rates – with more on the horizon — added to would-be homeowners’ worries.

“The data just keep telling the same story – low inventory and increasing prices,” remarked Mike Grady, president and COO of Coldwell Banker Bain. “As one of our brokers put it, ‘Sellers received an awesome Christmas gift in December, but buyers, only a lump of coal.'”

Brokers added 4,217 new listings to the inventory during December to bring the supply up to 10,571 listings. The volume of new listings surpassed the year-ago figure of 4,041, but supply still fell, dropping to only 1.4 months for the Northwest MLS market area covering 23 counties. Both King and Snohomish counties reported less than a month of inventory.

Robert Wasser, owner/broker at Prospera Real Estate in Seattle, said his analysis of the MLS data indicates the supply of single family homes for sale in King County just hit a post-recession low. “The only other time supply fell below one month was around this same time a year ago,” noted Wasser, a member of the Northwest MLS board of directors.

At month end, MLS figures show inventory (10,571 listings) was nearly 15.6 percent below year-ago levels (12,522 listings), with about 90 percent of the selection being single family homes.

Seventeen of the 23 counties in the MLS report had double-digit drops in active listings at the end of last month compared to December 2015.

Northwest MLS members reported 6,401 pending sales during December, up from 5,970 for the same month a year ago for a year-over-year gain of 7.2 percent.

“The housing market remains frenzy hot on a seasonal basis,” exclaimed J. Lennox Scott. Noting sales activity was substantially higher than the number of new listings, he said such conditions “continue to foster a competitive market where homebuyers are just waiting for the next new listing to come on the market.”

“Buyers pursued homes aggressively all through November and December with little to no slowdown amid fears of rising interest rates and worsening inventory levels,” said MLS director George Moorhead. “Inventory levels have dropped to their lowest level, which makes buyer frenzy even more intense as prices approach double-digit appreciation,” he added. Moorhead, the designated broker at Bentley Properties, calculates buyers have lost $37,000 in buying power due to interest rate increases. He likens the situation to having two cars, “one going forward, and one going in reverse. The gap is widening too fast for some buyers.”

Closed sales also finished on a strong note with brokers reporting 7,575 completed transactions during December. That’s up more than 6.8 percent from a year ago when members notched 7,091 closed sales.

Prices area-wide also continued trending upward, rising nearly 9.2 percent from a year ago. The overall median price for single family homes and condominiums that sold during December was $343,950; a year ago it was $315,000.

Condo sales slowed compared to a year ago, due at least in part to a sharp drop in inventory (down more than 19 percent). Pending sales were essentially flat (up 0.73 percent). Closed sales for December slipped nearly 6 percent, while prices on last month’s completed sales of condos rose 9.8 percent. The median price on last month’s closed sales of condos was $280,000. Condo prices in King County jumped more than 12 percent, from $279,975 a year ago to last month’s sales price of $314,000.

“Looking ahead to 2017, the Seattle market will continue to perform well, even with the expected interest rate increase,” stated OB Jacobi, president of Windermere Real Estate. The regional economy is in full stride, he noted, adding, “This will continue to create increased demand for housing across the board. Price growth should start to cool a little as inventory levels rise modestly, but overall, 2017 should be another banner year for the housing market.”

Consumers should expect prices to continue edging upward, suggested Moorhead. “NAR indicates we are 70,000 units short of meeting the housing needs in the Puget Sound area. Builders are just flat out running out of urban land to work with,” he said. Moorhead believes rising costs for construction labor are the driving force for price increases. Builder confidence continues to grow, reaching its highest levels since 2005, he noted, but added, “Naturally, some trepidation is heard as some feel this level of growth in the market is completely unsustainable.”

Grady believes the pattern of low inventory and increasing prices will continue. “We believe it is a predictor for what to expect throughout 2017,” he commented. “There’s simply not enough new construction to fill the needs of new employees being hired both locally and new to the state. The key is employment,” Grady continued, saying “There’s no reason to think that a new administration will cause employment to slow down; rather, it’s more likely we’ll see it increase in the Puget Sound region so we’re off to another strong start in 2017,” he stated.

Scott, the chairman and CEO of John L. Scott, expects a higher number of new listings will start to show up in mid-February – “just in time for the spring housing market rush.”

Northwest Multiple Listing Service, owned by its member real estate firms, is the largest full-service MLS in the Northwest. Its membership of nearly 2,100 member offices includes more than 25,000 real estate professionals. The organization, based in Kirkland, Wash., currently serves 23 counties in the state.